[If you’ve ever visited my now-defunct blog Spooning and Forking, you may recognize a few recipes that will be showing up on here in the next little bit – I’m going to be moving the content created on there over here! The smoked maple old fashioned seemed like the perfect recipe to start off with]​​​​​​​​​​​​​​​​​​​​​​​​​​​​

The venerable Old Fashioned; the original whisky cocktail. Arguably, the finest whisky cocktail. Today, we’re shaking it up a bit and introducing our version: the maple smoked old fashioned.

Created sometime in the early 19th century, it follows the classic cocktail formula (spirit, bitters, sugar, water) and has remained mostly unchanged for the last 200 years. Where legacy is concerned, the old fashioned reigns supreme.

With the resurgence in cocktail popularity, the traditional version of this drink has been enjoying a well-deserved renaissance. Gone are the days of muddled fruit and seltzer water – we can safely relic those inferior recipes to the ’80’s memory bank, alongside neon ski-suits and insufferable synth-pop. Besides, this new crop of cocktail-aficionados prefer their drinks spirit-forward and unapologetic – something the old fashioned has in spades.

So how does one “improve” on such an iconic drink?

As we celebrate our country’s birthday this month, we’ve taken this version of the classic and pushed it as far as our Canuck politeness will allow. We’ve chosen a bold & spicy 100% rye whisky that can stand tall against the strong flavours of maple. We’ve brought it to a new level with the addition of sweet, smoky applewood and have topped it off with a slice of deliciously-candied bacon.

While much of the world thinks of us as igloo-building, beaver-saving hockey players, this cocktail highlights some of our real attributes; namely, the resourcefulness and ingenuity to showcase domestic ingredients and really make the most of them. This smoked maple old fashioned might just become one of Canada’s best-known exports.

The raw, fiery spirit of the rye plays beautifully with the rich sweetness of the maple syrup and both are complimented nicely by the applewood smoke (via our Breville Smoking Gun). The combination of bitters introduces a tangible depth-of-flavour to the cocktail and also lends a subtle orange undertone to the drink, without overpowering the sharp edge of the whisky.

The smoked maple old fashioned is beautiful not only in its simplicity, but also because of how its flavour profile evolves over time – as the ice cube melts, the drink becomes progressively more diluted and the balance between its elements shifts ever-so-slightly. Sipping this cocktail on a warm summer night is an experience every Canadian should enjoy. And, after a couple of these, you might even relax those exquisite manners we’ve become so well known for. 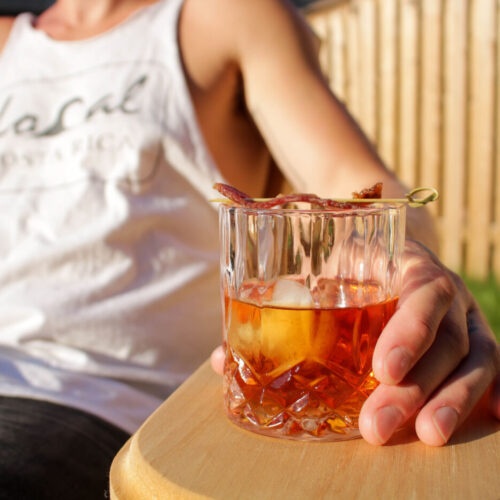 Although the applewood smoke and candied bacon really do elevate this drink, we’re aware that some people may prefer ease over innovation; feel free to omit these last two steps and simply garnish the cocktail with orange zest. It will still be miles ahead of the Old-Fashioned you’d be served at most bars.
Keyword classic cocktail, cocktail recipe, old fashioned, whisky

Looking for something a little milder? Check out our cinnamon whiskey sour recipe!